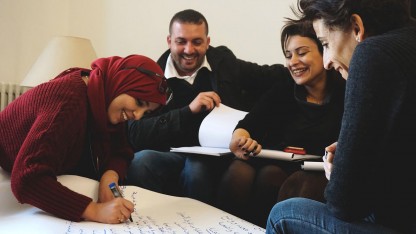 Danmission and partners aim at promoting religion as an integral factor in Preventing Violent Extremism (PVE) and promoting social cohesion within and between European and Arab societies as well as in East Africa and Asia.

Religion plays a vital role in the lives and cultures of the majority of the world’s population. Religious values and practices are often deeply entwined in the fabric of daily lives, and the leaders of churches, mosques, temples and other religious communities can potentially play a powerful role in shaping attitudes, opinions and behaviour. They can change lives, communities and countries.

Danmission have strong and long-lasting partnerships with interfaith institutions as well as civil society organisations in Syria, Lebanon, Jordan and Egypt. Danmission are moreover engaged in interfaith networks and intercultural platforms across Europe and the MENA region (Middle East and North Africa).

Together we also focus on the important role of women in preventing radicalisation and violent extremism. We are empowering female religious leaders and actors and have established a regional civil society network of social media activists and professionals that have addressed the issues of hate speech, hate crime and other manifestations of extremism, including campaigns targeting recruitment of women to extremist groups.

Danmission and partners consider youth as pivotal drivers for change when it comes to promoting social cohesion and peace-building within their local communities. The youth’s dignity is at stake and they should be fully recognised as valid and crucial players in society to ensure that they will be a positive asset for the future MENA – and not a threat.

Danmission believe that to create positive changes in MENA, and for this generation to become catalyst for more inclusive and democratic societies, they should be empowered and included in activities and decision-making processes in all the aspects of public life. Thus, Danmission train young professionals in management of religious diversity and fostering social resilience against religious extremism and radicalisation.

Danmission’s approach to prevent violence and extremism in East Africa is to address the grass-roots as well as the national governments. Among the grass-roots are children, youth and women. Danmission fight violence against children in religiously based systems of education and aim to improve living conditions for women and uphold their rights, based on a holistic understanding of women as representatives of the family and indeed the local society.

An example of local engagement with violence is found in Tanzania. In recent years, Tanzania has witnessed confrontations between groups of diverging interests, which to some extent have been interpreted as a conflict between Christians and Muslims, despite the fact that it is more a fight over economic resources and social positions. Together with local partners, Danmission are able to address this tension in the aim to make religious actors resilient to use violence in future conflicts.

On a Pan-African level Danmission support partners as All African Conference of Churches (AACC) and Program for Christian Muslim Relations in Africa (PROCMURA) with the church equipment. Danmission help religious actors to understand violent ideologies and ultimately to build effective measures to contain extremism. First, this involves intra-religious dialogue. For example, the Christian community seek to understand how and in what way Christian thinking – i.e. theology –invites to a relationship with the Muslim community. And the same challenge is presented to the Muslim community, to initiate intra-Muslim dialogue.

Finally, the engagements in Africa entail advocacy towards national governments and the African Union on behalf of people suffering from both violence and extremism. Both the AACC and PROCMURA are engaged in disseminating information to the grass-roots and supporting the AU goal of ‘silencing the guns’ in 2020.

Despite democratisation and regional ceasefires, Myanmar increasingly experience violent and armed conflicts, especially in the Northern and Western part. Therefore, Danmission focus on peaceful coexistence and interfaith dialogue in Myanmar’s Northern Kachin State. Through committed local partnerships, the connection between Christian churches and Buddhist monasteries are strengthened, and intra-faith dialogue is going on between the different Christian denominations. The goal is not only to get more harmony in the local community, but also to strengthen poor farmers and internally displaced people’s livelihood, regardless of their religion and ethnicity.

With 10 years’ of experience in Myanmar, Danmission are specialised in these underlying conflicts, and work intensely with local partner organisations to solve them – faith-based, church councils and Community Civil Organizations (CSOs). We believe that if the underlying conflicts are not treated professionally and respectfully, the dream for a National Ceasefire Agreement will not come through.

A key target group in this work is youth and students from Buddhist, Muslim and Christian backgrounds as well as from different social layers of society. These young people are brought together to learn how to engage in open and respectful dialogue and which tools to use to promote religious and ethnic tolerance in their home communities and network. Similar activities are targeting civil society leaders and opinion makers, including representatives from different faith-based CSOs.

At an institutional level, Danmission support the Academic Level Buddhist-Christian Dialogue seminars, which are co-organized by Judson Research Center of Myanmar Institute of Theology (MIT) and The International Theravada Buddhist Missionary University. The aim is to promote an academic level dialogue for the establishment of mutual understanding, respect, trust and cooperation in the educational process of interfaith dialogue. An important way to prevent radicalization and violent extremism is to eliminate misunderstandings and prejudices between religious groups and create alternative narratives about ‘the other’.

We bring people together in safe spaces to