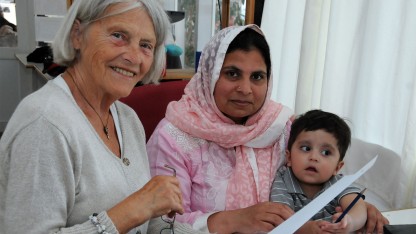 In Denmark, Danmission works to ensure that immigrants and others are able to create friendships that span cultural and religious differences. We achieve this through social work, networking, educational programmes, and work with children and youths.

Why does Danmission work in Denmark?

One of Danmission’s main objectives is to promote dialogue between individuals and groups from different faiths, thereby ensuring mutuality and creating room for peaceful coexistence and cooperation. Even though Denmark may not be a country particularly affected by internal religious conflicts, there is still a need for information, dialogue and greater understanding between different religions and cultures.

What does Danmission do in Denmark?

We work to create bonds between children and adults that cross cultural and religious divides, and to ensure that people have a better knowledge and understanding of the Christian faith, particularly in a Danish context. Danmission secures intercultural dialogue between followers of different religious faiths in Denmark.

In the neighbourhood known as Vesterbro in Copenhagen, in cooperation with Vesterbro Sogn and Sydhavn Sogn (2 local parishes), we run a centre for refugees and “new Danes” called ”Mødestedet” (The Meeting Place).

Through our department for Church & Dialogue and its subsection Danmission IKON (which consists of both Danmission staff and volunteers) we have initiated several dialogue projects in Denmark. Every year, Danmission IKON hosts a number of courses focusing on religous dialogue. IKON also publishes a magazine and books.

Danmission also runs a network called “Copenhagen in dialogue”, which is working to create dialogue between Muslims and Christians.

We are also the instigators of an interactive education programme in Denmark known as ”Konfirmand Aktion”. Danmission also organises summer camps and other events for children and adolescents throughout Denmark.

In Denmark Danmission is working with: