Skip menu and go to contentReturn to homepageGo to our accessibility guideNext post: Great show-up for the grand opening of the office in BeirutPrevious post: Danmission receives grant of 12 million danish kroner from the European Union
Danmission 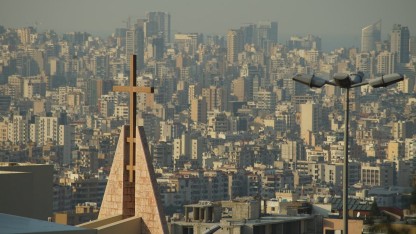 Danmission is growing stronger in the Middle East

This afternoon Secretary General Jørgen Skov Sørensen officially declares the new office in Beirut open – an office with space for more employees and thereby more support for the churches and the peace work in the region.

Danmission recently received 12 million Danish Kroner from EU to strengthen their peace work in the Middle East – work that the organization has been occupied with for more than 100 years. Danmission receives a lot of great support for instance through a strategic partnership with Danida and not to mention the wide-ranging public support including many private donors. The foreign ministry’s Danish Arab Partnership-organization has also backed the work up financially. And now the EU grant that has made it possible for Danmission to extend the work sphere in regards to new spaces and more staff in the Lebanese capital.

The money from EU is earmarked towards peace stabilizing projects in Syria, Iraq and Lebanon, and to lead the activities from Beirut makes a lot of sense. One of the experiences that Danmission has had in the Middle East throughout the years is that the countries are connected in a way that we are not familiar with in Europe.

This regards a strong cultural and religious bond across the countries, says Maria Lindhardt, who as Danmissions regional representative for The Middle East and North Africa is living in Beirut. She explains:

“There is a quite unique and public solidarity between the countries. However, what connects them is in some cases also what splits them. It affects the whole region when there are ongoing conflicts for years such as the Israel-Palestine conflict, the war in Syria and the tense Saudi-Iran relationship. And this is why Danmission and our partners are working hard in gathering people across nations and religion. We are doing this by creating a safe space for a constructive dialogue about the problems”, she says.

Until recently regional representative Maria Lindhardt has been the only Danmission employee with base in Beirut. But with the office extension there has been hired three Lebanese, and the plan is to send another employee from Denmark, more specifically a church consultant.

Maria Lindhardt explains that in the Middle East there is a great respect for faith-based organizations like Danmission, and therefore it’s not a disadvantage to be a Christian in a place that is predominantly Muslim. Quite the opposite, actually.

“The religious dialogue opens new doors for negotiation and finding solutions to the conflicts. In the interreligious dialogue there is a bigger freedom to be yourself than there is in the political diplomacy. I have experienced that when I changed jobs, from working at the Danish Embassy in Beirut to working in Danmission” she says and adds:

Various experts support Maria Lindhardt’s statement, including Senior Researcher by the Institute for Human Rights, Marie Juul Petersen, who recently said that faith-based organizations like Danmission have never been more sought after within development work.

Danmissions new office is located in Hamra, a popular part of town in Western Beirut. The opening reception is the 10th of April between 4-6 p.m.(danish hour).

This project is funded by the European Union