Skip menu and go to contentReturn to homepageGo to our accessibility guideNext post: Editorial: As Christians, we have been given freedomPrevious post: When religion becomes faith
Danmission 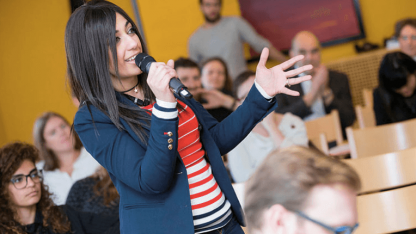 Participation of women, and a thorough knowledge of the ways and means of the enemy on social media, are necessary if we are to win against the extremists, this according to a Danish-Arab network of civil society activists.

The clear majority imagine a man, when they hear the words ”extremist” or ”militant Islamist”. But women play an equally important part, as men, when the radicalised groups recruit new sympathisers.

Well, an even more important part, if you ask Khouloud Khatib. She is a university lecturer in international law in the Lebanese capital of Beirut, and part of the Danish-Arab network ”Empowering Women Countering Extremism (EWCW)”, which consists of among others of feminists and media people. All see a pressing need for women to participate actively in fighting extremism.

Khouloud Khatib says that the militant Islamists, who are known for a very conservative view on women, have exploited that many of us, who try to prevent the extremists´ propaganda, would never suspect women for being supportive of the propaganda. That is why women relatively freely have been able to share the extremist messages online as well as offline.

When radicalized groups like ISIS recruit new supporters, women are often perfect ”talent scouts” due to the subtle way they move around in society, and how they faster than men become aware of potential problems in their social sphere.

According to Khouloud Khatib it is often promises of marriage to so called ”holy warriors”, and the opportunity to give their lives to their religion and God, which get more and more women from the West, and from the Arab world, to join the extremist groups.

”There is a very large need to inform these women, so that they can see through the propaganda and its promises. At the same time, there is a need for the women to develop alternative information as a counter weight to the information, which is being used to recruit on the social media”, she adds.

The Danish-Arab network EWCE, which Kholoud Khatib is a part of, was initiated by Danmission and our partner FDCD, which is based in Syria as well as in Lebanon.

In December 2016, the participants in the EWCE program were gathered for a week-long work shop in Lebanon. Here Khouloud Khatib, with a group of Iraqi participants, planned and carried out an anti-ISIS campaign focused on Yazidi women, who have been held prisoners by ISIS. The Yazidis are a minority population group in Iraq, which has suffered particularly during the reign of ISIS in Iraq.

The campaign consisted of video filmed witness statements from the Yazidi women, who despite the horror stories from being held prisoners by ISIS, didn’t want solely to appear as victims.

”It was a clear point of the campaign not to portray the Yazidi women as victims alone. It was important part of the campaign to focus on the fact that the women have escaped from captivity, and have moved on with their lives. Because we must hold on to hope and the positive aspects of their stories. If we focus on the victimization alone, we don´t fight ISIS, and we don´t give the victims a chance to live on as anything but victims”, says Khouloud Khatib. She has no doubts that social media is the place to fight the battle:

“When one sees the extent to which extremists use social media in their recruitments in the West and in the Arab countries, we must disclose our responses to the recruitments on the same media platforms”.

To step in the shoes of the extremists

Khouloud Khatib has previously participated in Danmission´s training program ”Leaders for Interreligious Understanding (LIU)”, which in 2017 celebrates that it has trained and educated more than 100 youths and adolescents in religious dialogue.

It is important to master peaceful dialogue. But it is also necessary to go one step further, says Khouloud Khatib, telling how she and the other EWCE participants try to step in the extremists’ shoes, to think and argue like them. This to fully understand, and thus effectively counteract the extremists’, social media strategies.

”I would like to emphasize the word understanding. Not until you understand how your opponent thinks and uses his views in his strategy, can you really oppose extremists. If you only look for solutions from your own perspective, your tools are not strong and effective”, she says, and adds: ”When you fight extremism, you can only do that by knowing the extremists´ language and partly copying it. It’s all about knowing and using the right and most effective words”.

It is not without danger

Because it can be dangerous to fight with extremists on social media, Khouloud Khatib and the other participants in EWCE have received special training in digital security. Many of the participants were surprised how relatively easy it is for hackers to find their way to your email inbox and your accounts on Facebook and Twitter, unless you got the right security settings.

In total, 30 adolescents from Denmark, Egypt, Iraq, Jordan, Lebanon, Syria and Tunisia have participated in the EWCE-program, which consisted of a four-day seminar, a work shop (of one week), and a final campaign and evaluation from October 2016 to March 2017.

The participants’ professional as well as cultural and religious starting points were very different. However, everyone had experience with marketing or activism on social media, and several already work with religious dialogue and / or women’s rights.

But Khouloud Khatib is convinced that all EWCE participants have now got new tools and new allies, when it comes to focusing on the role of women in the fight against radicalization.