Skip menu and go to contentReturn to homepageGo to our accessibility guideNext post: Women fight ISIS on FacebookPrevious post: Monk and friend of Danmission combines prayer and meditation
Danmission 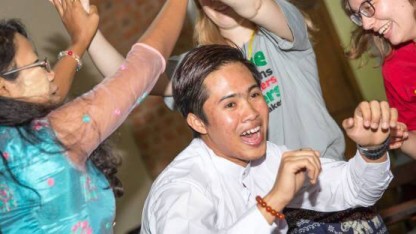 Golden pagodas, crowded traffic and a myriad of people are the start of many travel stories from "The Golden Land". Myanmar is all this and much more, but this is not where my travel experience takes its starting point.

In a hall, deep in the country side a large group of young people is gathered. Some know each other well, while others have only known each other for a day. I am among the latter. People are laughing, there is dancing, singing and playing. I am sitting with the feeling, that everything comes together, and all it takes is so very little. But that it only takes this little, is difficult to remember in daily life.

During the entire day, the large group of young Danes and Burmese – Christians, Buddhists and Muslims – have been in dialogue with each other about faith: Interreligious dialogue.

Before the activities of the day, I thought it would be a simple matter: I study religion, have a broad knowledge of the different religions, and I am used to discussing religion through my involvement in the YMCA&YWCA and DKG (a Christian organization for highschool and college students i Denmark). So. Interreligious dialogue – that’s straight forward!

I was wrong! But just as difficult it is to admit your mistakes, and that you have failed, just as wonderful and meaningful it feels, when we are laughing in the night in Myanmar, and when we forget that we laugh with Christians, Muslims, Buddhists – Danes and Burmese: When all we notice is that we laugh with other people.

Take the elevator from head to heart

Lying in my bed late at night, well protected from frogs and other creep by my mosquito net, I think back at the things, that have changed me during the experiences of the day.

When you study religious science in your daily life, you think and speak incredibly much using your mind: What did I learn and read? Years and facts! But lying there in the heat and the darkness of the night, I can feel my heart, because it is my heart I have used in the dialogue. I have experienced the importance of speaking from my heart, when I talk to others about faith.

Because when talking about faith, then speech and facts become subordinate to the meaning that faith can give to one’s life.

Therefore, there should be a call for everyone to take the dialogue elevator from head to heart. When you are in Myanmar and experience how Buddhists and Muslims, who several places in Myanmar are in bloody conflict with each other, see each other in a new light as humans instead of as representatives of another religion, then everything makes sense and comes together. You then may feel a little naive hope for a better world growing inside you.

Back in cold Denmark I am once again well-grounded in scientific and theoretical explanations for religion and our need for it. However, I am still more experienced in one sense: That religion makes a lot more sense, when it becomes faith.

IN MYANMAR WITH GERTRUD AND SIGNE

Gertrud Payal Pilegaard Thomsen: 20 years old, from Vejle and active in YMCA&YWCA, takes a sabbatical year after finishing her secondary education, and is currently working as a substitute teacher in a public school.

Signe Maj Petersen: 24 years old, from Aarhus and active in FDF (a Christian organization for children and youth in Denmark) and YMCA&YWCA. Studies musicology in Aarhus.

What moved you the most?

„Change is what moved me the most! From we began as individuals from two different cultures, looking to learn about dialogue, till we now feel as a group – well, even as a community. That is a relevant experience. I am now considering how to bring the experience to Denmark, and how to pass it on“.

„It made a huge impression on me, that we, 45 strangers, could create a mutual confidentiality, where we could be open and honest. That amazed me, and made me hopeful for the future. It was fantastic to experience how much we have in common – Buddhists, Christians and Muslims. We all want the same, but have different ways to achieve it“.

What do you bring with you from the dialogue camp?

„A dialogue exercise between a Buddhist man and a Muslim female became an eye opener for how difficult it is to talk about conflicts and problems. But if we do not involve ourselves more in the conflicts, to understand them better, then we will not be able to solve them. I am considering studying anthropology, and on this dialogue camp I have considered how important it is to reflect on how others think, and listen to what they think and feel. Otherwise, we risk generalising“.

„During our final evaluation, I could feel how much the participants changed on the dialogue camp. And how grateful we all are about it. It gives substance for thought, and it gives us energy and inspiration to carry on this kind of work when we get back home”.