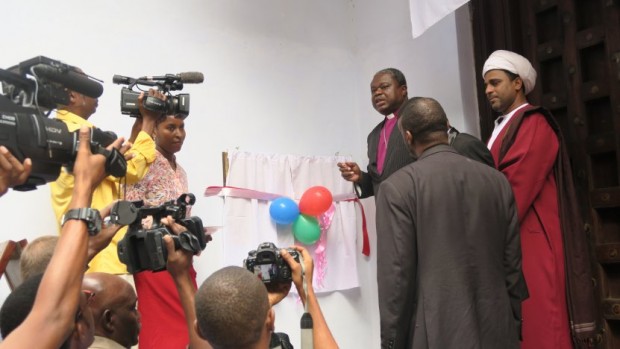 In a newly calcined, pale blue house in Stone Town, Zanzibar dialogue is taking place on many levels. The new centre, which Danmission runs with the local diocese, has recently been opened.

Tourist hotels set on fire. An assassinated priest. An acid attack on a sheik. Violent power struggles about politics, money and religion. These are stories that in recent decades have intertwined with tourists’ holiday tales from Zanzibar off the coast of Tanzania.

This is all very difficult to imagine, when you sit at the edge of the sand and look at the local boys competing to make the coolest backflips into the turquoise sea, while laughing and making fun of each other, and when you relaxed leave the beach to walk through Stone Town’s narrow alleys, where souvenir sellers sell T-shirts printed “Hakuna Matata” – No Problems.

But in the end, it makes perfect sense, that Danmission, in cooperation with Tanzania’s Lutheran Church, operates a dialogue centre here in Zanzibar’s capital city.

Fear is the root of violence

”Upendo – Means Love” it says on the sign at the entrance to the newly calcined, pale blue house, which heavy wooden cut doors have been opened in to the clothing store and the sewing school behind it. Up the stairs you find the sewing workshop, and on the top level is where you find the diploma level dialogue education. Dialogue on three floors – Dialogue on many levels. Danmission’s dialogue work in Zanzibar was originally begun in 2005, but the new facilities for the future dialogue work were opened on 22.05.2017 in a historic, but very dilapidated property purchased and refurbished with support from the Danish and Norwegian embassies.

The goal of the new place is for Christian and Muslim women – and men – to get tools to create peaceful coexistence and simultaneously fight their way out of poverty.

“It’s easy to get afraid of those who believe in something different from yourself. And fear is the root of violence and unrest – also in Zanzibar”, says Lusungu Mbilinyi, a priest in Tanzania’s Lutheran church, who works at the Zanzibar dialogue centre to create dialogue between Christians and Muslims.

“The Bible does not say that we shall only love our brothers and friends – we shall also love our enemies. But it’s hard to love someone you’re afraid of”, he adds. “Therefore, we have started the school where Christian and Muslim women learn to sew, so they can earn an income, but also so they get to know each other. And that´s why we have set up a football team, peace committees, an education in dialogue, a radio quiz and much more”.

Kantate Chao, 31, was educated as a seamstress in Upendo, and now works at the school, but we also meet Kantate, when she works in the shop below smiling as always.

“I started at the school to learn how to sew. But I found out that Upendo is also a great place to get to know people. Here there is an open atmosphere, so I can ask about things I do not understand or may even be afraid of, and the Muslims can ask me”, Kantate tells.

“I was raised to believe that Muslims are bad people, and I believed it because where I grew up we were practically all Christian. At Upendo, I got to know Muslims and realized that it is a prejudice that Muslims are evil. A human being is neither good nor bad because of his religion, but because of the person he/she is, and what he or she does”, she tells, before concentrating on a customer interested in a wonderful dress for a little girl.

Conflict solvers in the tourism industry

21-year-old Hidaya and her fellow students are on the floor above the shop. Hidaya became a student last summer, and is 21 years old. She is a Muslim and one of the students on the new diploma level education.

“In Zanzibar, we experience conflicts in families, between neighbours and in society. Conflicts can be about religion and culture, but often there is controversy about politics or economics beneath.

For example, hotel owners, who are often Europeans or from the African mainland, fight with locals over the water supply. This kind of conflicts, which can get very violent, have religious and cultural undertones, as the Europeans and the mainland Africans most often are Christians, while most of the local people from Zanzibar are Muslims”, explains Hidaya, who dreams of becoming a conflict solver.

“On the diploma level education, I learn to understand the conflicts, and how to mediate. Mediating is badly needed in the local communities, and in the schools, ministries and the tourist industry. Not least in the tourism sector is there a great need for more knowledge about the various religions and cultures, so that tourism does not create conflicts”.

A good day for the priest

And then back to Lusungu Mbilinyi to ask why it makes sense for him as a Christian and as a priest to secure dialogue in Zanzibar.

“When I have had a good conversation with a seamstress, a student at our dialogue school or with the Muslim sheik. When we have discussed our concerns. When I have understood them, and they have understood me. Then I believe that I have planted small seeds of hope and love, so that we can live in peace and harmony with each other”, says Lusungu Mbilinyi and adds:

”Even though it is relatively quiet in Zanzibar right now, it is important to maintain the good relations between Christians and Muslims. Because even in Zanzibar, moderate dialogue-seeking sides can be undermined by the growing influence and pressure from radicalized and violent religious flows”.

Watch the top video “The Hands of the Church” about Danmission’s work, including in the field of dialogue.