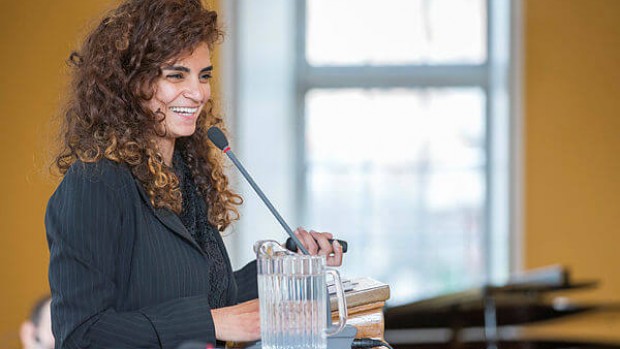 It may seem impossible: Can religious people of very different faiths live together in peace? “Søndag Morgen” participated in an interfaith conference in Copenhagen, Denmark, about accepting differences – and even celebrating them.

So said Raid Jarjour, a Christian pastor and leader of the Forum for Development, Culture and Dialogue (FDCD) in Lebanon who works in dialogue, peace and reconciliation in Syria, Lebanon, Egypt and Libya. Dr. Riad Jarjour was one of the panelists at Danmission´s interfaith conference in Copenhagen, Denmark held on 22 February 2017, and illustrated his point using an example from a previous dialogue conference in the capital (Copenhagen, Denmark).

Dialogue on the streets of Copenhagen, Denmark.

“I walked to our lodging along with two Imams, as a cyclist drove by and shouted insults at us. We were obviously frightened – especially when he turned around and accused us of being from Islamic State (IS)”. “I’m gay, and you do not accept people like me”, he said to us. But Karen Klint (MP for the Social Democrats, ed.), who accompanied us, asked the young man to come closer, and asked him what was wrong. A long talk followed, after which one of the Imams ended up inviting the young man to his mosque: ”You are always welcome in my mosque, and if you show up, you will always be a part of my family!”.

“When people feel that they are accepted as they are, it removes a lot of tension. Therefore, we must accept differences, even celebrate them”, said Riad Jarjour. “We aim to have a dialogue with those who are different from us. There is no point in only talking to those we agree with. We must accept the religious diversity and understand that religious diversity is a blessing”, he said.

“It was obvious that the panelists from the Middle East were accustomed to relate to people of different religious persuasions. Just in Lebanon there are 18 different faiths”, said Dr. Nayla Tabbara from Adyan Foundation in Lebanon. Adyan Foundation is an institute for interfaith studies and spiritual solidarity.

“We can not ignore the fact that all our societies are diverse, and that they change over time. We need to see that as a positive thing and not as a threat. Therefore, each group should speak openly about their fears and concerns. If we dare not speak openly – and if each religion removes itself from the surrounding world – then fears will only grow”.

“Before the civil war in Lebanon, everything was perfect, we say. Yes, on the surface it was! But because we did not speak openly about our fears and worries, we ended up with a civil war. The fears led to populist rhetoric, and people took up arms. That process we can learn from today”, says Tabbara:

“Stereotypes come from somewhere, they come out of something. They can grow. We all have them, but we must prevent them from growing in our emotions”, Tabbara stated.

”But this is where theology can help us”, claimed Naveed Baig, who is Imam at Rigshospitalet and at Dansk Islamisk Center (an Islamic Centre):

”Humans are born self-centred, and in our egoism, we tend to forget our fellow man, and even create a ’stranger’ of our fellow man. But if we go back to the roots – and to many of us that means God – and ask ourselves ‘what is the purpose of creation, the Earth and ourselves?’, then it becomes easier to understand, how important diversity is”, Naveed Baig claimed, and continued:

”Theology is a good alternative, because it can ‘de-radicalise’. It is inclusive to see ourselves, and each other, as created by God”.

According to Karen-Lise Johansen, Area Manager at the City of Copenhagen Municipality, it has not been easy to include the various different religious groups in the cooperation with the Municipality.

”We initiated an inter religious forum to secure, that all religious groups could participate. But we became very surprised of the sectarian division. And it frightened us, that internal religious conflicts could influence our work. But in the end, we managed to find a form: We created a citizen forum, which represents the entire diversity, but focuses on the local community”.

”But how can we be in dialogue with those who do not want dialogue?” a participant in the interfaith conference wanted to know. ”We have to confront the violent ideologies and find possibilities for dialogue and negotiation”, Riad Jarjour replied. ”Extremism is part of human nature, but violent extremism of course must be stopped. The problem is based in the fact that we do not listen to each other”.

The City of Copenhagen Municipality has taken a very practical approach to create a common platform for cooperation:

“Those parties that the Municipality cooperate with, must sign an agreement on tolerance, equality, diversity, freedom of expression and so on. However, it is not everyone who wants to sign this, and those who do not we can not have a formal collaboration with”, said Karen-Lise Johansen and added: “But that does not mean we can not be in dialogue with them. We can reach out, and we do this to different groups. But they are not formal partners of the Municipality”.

Find a way to each other’s hearts

Naveed Baig: “We must recognise that we live in a diverse world. In Denmark we have very established political parties, that do not believe in multiculturalism. We must find ways to the heart, be role models and to live as we preach, according to our norms and values. We must find ways to the peoples hearts to bring change. Dialogue and diversity is sacred, and we should show sacred altruism, as we see each other as human beings. We must go ahead without expecting that the rest of society supports us. We need to change the rhetoric, so that multiculturalism is considered a positive factor”.

Differences are both challenging and inspirational

Bishop Peter Fischer-Møller from the Diocese of Roskilde supplemented:

“We can get more interested and curious about each other. Often we accuse minorities for not being interested enough in others, but we must look closer at ourselves. We are ourselves not interested enough as Christians”, Peter Fischer-Møller said and continued:

“Dialogue does not mean to erase differences, but to become aware of differences and consider them challenges and inspirations. Some differences need to be confronted, while other differences open new doors. Dialogue must be part of our existense, including that we talk with those who do not necessarily want or seek dialogue. We must be willing to talk even with Hizb ut-Tahrir”.

Dr. Riad Jarjour went on to tell of a tense dialogue with Muslim groups in Tripoli, Libya: “Thanks to the Danish Arabic Partnership Program (DAPP. In Danish: Dansk Arabisk Partnerskabs Program) we were able to bring people together, even though they were very different from each other. The talks were successful, although tensions were so great, that we had to have guards present, to make sure participants would not kill each other! But afterwards even the most conservative participants were happy to sign a common code of ethical conduct”.

Can spirituality unite us?

A question from the audience was directed to Imam Naveed Baig: “Can spirituality be a meeting place for dialogue?”

“We need father figures, who relate to each other and find creative ways to convey their messages. Each must be true to their own faith, but also find ways to involve the surrounding community. One must have creedal credibility, and at the same time be able to relate to each other. If religious leaders are not deeply rooted in their own tradition, they can not advise the many young people who are looking for concrete answers”, Imam Naveed Baig replied.

“We also have all the mystical aspect of the interfaith movement, which not only talk about spiritual traditions, but practice them. When the time comes, we can share the mystical aspects of our religious traditions with each other. At the same time, we also need to share our everyday living situations. This is where we are one with each other. We love, we feel sadness and so on. And since we currently live in very emotional times, this is a good way to link ourselves to each other”.

Three adolescents from the Middle East told how training included in Danmission´s project “Leaders of Interreligious Understanding (LIU)” inspired them to participate in religious dialogue:

“In the Middle East we can deduct our religious backgrounds from of our names”, said Sally Joseph Akiki. “My father is named Joseph, and is a Christian, my mother’s family name is Akiki, and she is Muslim. We are now developing a new approach, a ‘street wisdom’, where we are not just spectators, but involve ourselves actively in each other’s lives”.

“As a Christian, I am a minority in Syria. It can be a challenge, but for me it’s a blessing”, continued Amer Ghantous, a doctor from Syria. “There are so many possibilities. You can relate to so many. In wartime minorities can build bridges of reconciliation between communities”.

“We focus on celebrating our similarities”, Tamara Al Abaddi that coordinates LIU’s work in Jordan said.

“We use the Jordanian folklore to tell, how for many years we have peacefully lived together as Christians and Muslims. We also celebrate our differences. You are different, I am different, and there is nothing wrong with that!”.

Read more and Danmission’s work in the Middle East and North Africa here and follow our work on Facebook (in English).