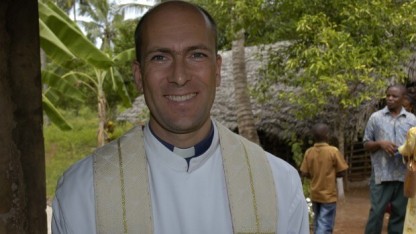 Arngeir Langås laid down the foundation for Danmission’s Christian-Muslim dialogue work on Zanzibar in the past decade. With additional experience from the Danish NGO 'Mission Afrika' Norwegian priest Arngeir Langås has now been reemployed by Danmission.

Arngeir Langås on February 1, 2017 joined Danmission as advisor (fagkonsulent) on church development. Arngeir’s main task will be to strengthen the cooperation with Christian churches around the world and their development. However, the 47-year-old Norwegian priest is not unknown to Danmission. In 2001, Arngeir Langås and his wife Dorthe Davidsen were Danmission’s first envoys to the East African island group of Zanzibar. There were no predecessors to follow, and Arngeir´s task was simply to develop good Christian-Muslim relations.

As pastor of the Lutheran church, Arngeir Langås quickly established a cooperation with the Catholic and Anglican churches and the Muslim Mufti´s office. When the couple left Zanzibar nine years later, the sewing school Upendo – a project for Christian and Muslim women – was well established. An interfaith dialogue centre (called ‘Zanzibar Interfaith Centre’) had been inaugurated, and Arngeir Langås in addition had been involved in the formation of a peace committee for Christian and Muslim leaders on Zanzibar.

It is with the same openness and belief in the opportunities of future cooperations that Arngeir Langås approaches his new job:

”I look forward to working with the churches’ local diaconal initiatives and the development of the initiatives. It’s all about listening and understanding different contexts, and on that basis finding out how to do things together”, said Arngeir Langås.

Arngeir Langås returns to Danmission from a position as partnership coordinator of Christian-Muslim relations in Danish NGO ‘Mission Afrika’, where he became employed when the family left Zanzibar in 2010. Since 2012, Arngeir Langås has concurrently been working on a soon to be completed PhD thesis – again on Christian-Muslim relations in Zanzibar.

The missionary child from Madagascar

The interest in the church’s role in the world is not one Arngeir Langås has come by on his own. As the child of Norwegian missionaries in Madagascar, he got the interest with his breast milk.

“Everyone looks back to see if they can find a common thread in their lives, and there is no doubt that the church and the international aspect has been an important part in both my childhood and my adult life”.

Arngeir Langås was born in 1970 in Norway. He finished his theology studies in 1997 and was ordained a priest the following year. Subsequently, he studied practical pedagogy at university and moved to Denmark in 1998 when he married Danish Dorthe Davidsen.

The couple lives with their two children in Voel, near Silkeborg, but plan to move to Sjælland (Zealand), Denmark.