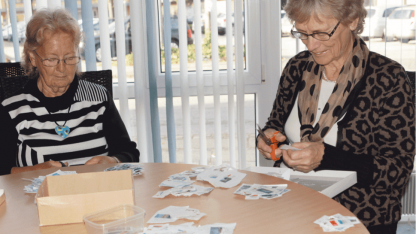 Although the number of e-mails nowadays far exceeds the number of envelopes in our physical mailboxes, the stamps donated in 2016 to Danmission still amounted to DKK 98,000 in total. Danmission's stamp managers are proud of the splendid result.

“Thank you, thank you and again thank you everyone, who donated stamps to Danmission in the past year”.

So says Søren Sp. Bro, who is volunteer network consultant in Ribe Diocese, and responsible for the received stamps.

Søren Sp. Bro once again has seen a big pile of stamps, collections, Christmas cards and nice envelopes donated to Danmission from abroad and from all over Denmark. Even Søren Sp. Bro himself is impressed by the quality:

“This year I have received so many fine effects, such as a large collection of Danish and Faroese stamps, Icelandic envelopes, FDCs (first day editions), Christmas cards and more”, he says.

The volunteers receive special thanks

Some of the received items are sold directly to collectors, but most of the stamps, by far, are sold by Danmission´s sales staff in the Danmission Genbrug shops (recycling shops). Søren Sp. Bro particularly wants to thank the staff for being so loyal and committed to the cause.

“An equally large thank you goes out to all the ‘cutters’, who cut the stamps from the envelopes. It means a lot to collectors of stamps, that the stamps in the packages look attractive”, Søren Sp. Bro explains.

In Skjern alone DKK 92,000 worth of stamps were donated and sold in Danmission Genbrug shops in 2016. In addition, two other outlets in Denmark sold for approximately DKK 6,000 in 2016. In total, stamps contributed wonderful DKK 98,000 to Danmission’s accounts.