Skip menu and go to contentReturn to homepageGo to our accessibility guideNext post: Danmission envoys moves from Bangladesh to CambodiaPrevious post: The Portrait of Christians and ’the other’ in curricula in the Arab world
Danmission 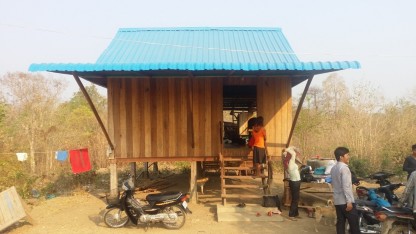 BLOG: We confiscated a couple of chainsaws

Read blog from Danmission's intern i Cambodia who is sharing his experiences on riding a motorbike for 8 hours on bumpy roads, confiscating chainsaws from illegal settlements in the Prey Lang Forest and doing focus group interviews.

Having spent my first month in Cambodia as an intern at Danmission, I have gathered more than enough new experiences to share with you in this lengthy blog-post. After initial hardships, namely not being able to pick up my luggage upon arrival at Phnom Penh but only 2 days after, and mysteriously falling ill with high temperatures for a day in the first week, I was able to join anthropologist Courtney Work and her fellow researcher Vannrith Rong on our first field trip to Prey Lang forest area. I could finally experience first-hand what I until then had only read about in news feed from Ernst (our Danmission coordinator in Cambodia) and scholarly articles on the issue of grass-root forest protection patrols carried out by Prey Lang Community Network. Exploring the local fauna and flora of the tropical dry semi-evergreen forest was moreover a no less exciting prospect for me as an amateur naturalist.

My task on this and the following field trip was to note down any information Courtney (who speaks Khmer) and Vannrith deemed important for their research. They would mostly interpret parts of conversations among PLCN members or between PLCN members and a third party (usually loggers). Our first destination was a small village Ksarch Kpors on the west bank of the Mekong River in Kratie province. There we were met by Sam Nou and Mr. Leang, both core members of PLCN, who were conducting a research of their own on the immigrant communities deep in the Prey Lang core zone. The following day we join them on their trip to one of the many illegal settlements inside the forest to conduct group interviews with the villagers. 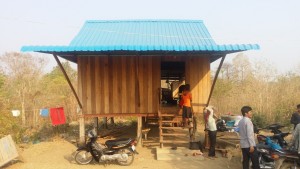 My first impressions of the trip: riding on the back seat of a motorbike for up to 8 hours a day is a really difficult challenge! The forest roads are not exactly smooth and given my height (almost 2 meters), every acceleration, braking and going over a hole in the road translated into me swinging, bouncing and rocking like a doll. Consequently, my backside turned out to be the part of my body most affected after the trips were over. Secondly, no matter how much water you drink in the jungle, it never seems to be enough. I swear I drank two to three times as much as my Cambodian friends from PLCN, who were kind enough to provide me with some of their supplies when I had already drunk mine.

Although we confiscated a couple of chainsaws on our way to the abovementioned illegal settlement, our main goal was to find out why people had moved into this area and what their livelihood strategies now look like. Through conducting a focus group discussion and key informant interviews (with Mr. Leang being the main interviewer), we learnt that first families had arrived in the area around 2009. They moved in with the intention of mining gold in the surrounding forest, however only a few had carried on with this activity until the present due to its low profitability. Another wave of arrivals in 2012 followed evictions of several families from their homes after corporation Think Biotech claimed ownership of the land citing their ELC (Economic Land Concession). Local authorities informally accepted this new settlement as temporary on the condition that no new logging of the forest would be carried out apart from the already cleared land for subsistence farming. All the villagers interviewed swore that they had never taken part in an illegal logging activity – however, our team concluded that it is highly unlikely these families should live off only subsistence farming. 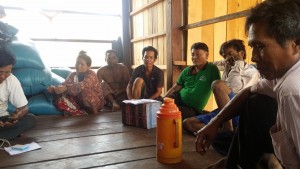 Focus group discussion with villagers who had migrated into the core zone of Prey Lang.

In addition, we heard recurrent stories of resin trees being cut down all over the forest. Resin tree tapping is an important source of income to many families in Prey Lang area, who use it as a safety net and an alternative livelihood when rice farming is not available in the dry season. Resin is usually sold as varnish to fishing boat manufacturers or for house construction purposes. Though being a second-grade timber, various species of resin trees are now however becoming increasingly targeted for timber as luxurious rosewood and ‘bang’ trees have been almost completely depleted by selective logging by now. 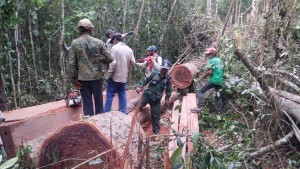 Resin tree logging was therefore also a topic of another research conducted by Stung Treng PLCN group members (Mr. Sothea and Mr. Ko). They enquired the local villagers about their cooperation with Conservation International who have been supporting them financially to patrol the resin tree forests. Investigation however showed that they have few rights to actually stop the illegal loggers from cutting the trees and that they can only protect the resin trees themselves and not the surrounding forest. Cooperation with authorities such as local police chiefs and FA officials is crucial, but the reality leaves a lot to be desired.

On our trip to investigate a reported resin tree logging some 20 km deep into the forest, we came across a village where we gained more insight into the issue. We met an elderly man (Mr. Lu On) who had moved into the forest 2 years ago to be closer to his resin trees to be able to protect them. We learnt that a lot of resin tappers nowadays prefer to either sell their trees to the loggers or cut them themselves because otherwise they might lose them to illegal logging in a short future anyway and not receive any financial benefit. Despite Lu On’s credible story of his presence in the forest, we concluded again judging by the stacks of wood next to his hut that he too must have to a small extent been involved in illegal logging. 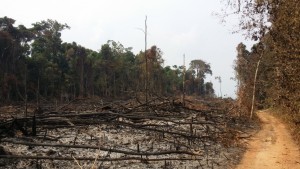 The general impression of my first visit to the area was that the communities have got caught up in a vicious circle of deforestation and losing livelihoods as the destruction of forest continues. This was triggered by both massive land grabs by corporations and large-scale immigration by landless people from other provinces. These plantation clear-cuts are moreover accompanied by continuing selective logging for whatever higher-grade timber there is left in the forest. There are reported connections between the two categories of forest destruction, namely corporations owning ELCs in and around the forest hiring locals to cut trees outside their concessions and transport them to sawmills located inside the concessions to give the timber an appearance of legality. It seems to me little will change until the authorities themselves start genuinely fighting the forest crimes, which however appears to be a far cry to many locals for now.